Watch Out for Stinging / Biting Insects

Find this article at:
go.ncsu.edu/readext?307564
— Written By Bill Hanlin and last updated by JoAnne Gryder 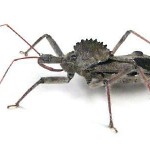 We often see insects during the summer that we know we should avoid. Bees and wasps are plentiful this time of year and can cause serious health problems for those individuals that are allergic to insect venom. Most people avoid contact with these common stinging insects if at all possible. However, there are some unusual insects beginning to show up in our area that can also inflict painful wounds if the insect is not avoided.

Probably the most brightly colored of these unusual insects is the velvet ant. The velvet ant also goes by the name cow killer, even though it is no more dangerous to livestock than it is to people. This insect looks like a large ant, about a half an inch long, with black and red markings on a hairy body. The velvet ant is actually a wingless wasp and is capable of stinging multiple times if handled. Velvet ants are loners and you very rarely see more than one at a time crawling through a lawn or garden.

Another insect we see increasing in numbers at this time is the saddleback caterpillar. This caterpillar is green with a brown saddle-like mark on its back. Four large tuffs of spines are found on the insect, 2 in the front and 2 in the rear. Smaller spines line the sides. These spines are what cause skin irritation when someone comes into contact with them. The irritation often looks like a rash and can be rather uncomfortable for a couple of days. Saddleback caterpillars can be found almost anywhere including corn stalks and trees.

The wheel bug also does not like human contact. This insect is one of the more unusual insects that I have mentioned, however they do become more numerous this time of year. The wheel bug is approximately 1 inch long and is blackish grey in color. The wheel bug gets its name from the hump just behind its head that looks like the spokes of a wheel. These insects have piercing and sucking mouthparts that are similar to mosquitoes only much, much larger. When handled, the wheel bug can inflict a painful bite.

A wide variety of insects and their relatives have the potential for inflicting pain in people. The rule of thumb when dealing with insects is to leave them alone unless you know for certain that the bug is harmless. Most insects are not aggressive unless they or their nest are being threatened.