Wilkes County Center will be closed tomorrow, Mon 01/20/2020 for the holiday.

— Written By Bill Hanlin and last updated by JoAnne Gryder 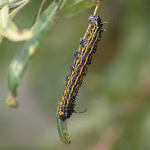 The end of summer usually means the build up of large insect populations. While Japanese beetles are on the decline, other insects always seem to be a nuisance this time of year. Caterpillars, in particular, are very numerous and can be quite destructive to foliage on trees and bushes.

Oak trees seem to have more than their share of caterpillar problems. Orangestriped oakworms, fall cankerworms and leafrollers can be found in the hundreds on certain oaks. These caterpillars can strip twigs and branches of all of their leaves. Their feces, or frass, can cover walkways and driveways, and some people may be allergic to the frass.

Another caterpillar that seems to be particularly abundant this year is the fall webworms. These are the insects that build the webs on the end of branches and look unsightly. Some homeowners are tempted to burn the webs out of the tree, however this is not advisable since the fire can also damage the tree.

One of the saving graces about caterpillar damage is that they very rarely have any impact on the health of the tree. Problems can arise if the tree is defoliated year after year that may lead to a gradual tree decline. Also, newly established or weak trees may not be able to withstand caterpillar defoliation.

Caterpillars normally do not require a pesticide application. Actually wasps and hornets are predators of caterpillars and may be able to control some populations. Pruning out and destroying webworm nests on young trees can also help control caterpillar populations.

There are a number of insecticides available to homeowners if you are still determined to apply an insecticide. Bacillus thuringiensis, sold under the brand name Dipel or Thuricide, is an organic option that only kills caterpillars. The Wilkes Extension Service has a list of other conventional insecticides that will also take care of caterpillar problems