Do You Know the Advantages of Creep Feeding Your Calves

Find this article at:
go.ncsu.edu/readext?329589
— Written By John Cothren and last updated by Sam Lusk

Creep feeding is a means of providing supplemental nutrients to nursing calves, usually 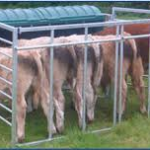 in the form of grain, protein supplements, commercial calf creeps, or high quality forages. Calves are usually allowed access through a gate large enough to allow calves to enter but small enough to restrict access by cows. Creeps vary from grains to “creep grazing” high quality forages to limit-fed protein supplements. Analysis of whether or not to creep feed is a complex issue. Several factors which need consideration before making the decision to creep feed include:

A common misconception is that creep feeding will reduce nursing pressure on the cow. However, research data from Oklahoma and Nebraska indicate that milk intake by creep and non-creep fed calves is similar. Calves prefer milk first, highly palatable creep second, and forage third. When milk and forage are available, creep feed becomes a substitute for forage. This may be advantageous only when forage supplies need to be stretched. In general, creep feeding should be provided for at least the last 60-days before weaning. Place the creep feeder in an area which will be frequented by the cow herd. Locating the feeder near watering areas or areas where cows normally loaf will ensure that calves are exposed to the feeder. When starting to creep, limit the amount placed in feeder and monitor it frequently. Calves generally will not leave their mothers even for the most palatable creep feed. Providing salt and mineral for the cows in the same location can also help attract the herd to the area. The moon and stars have aligned to present an opportunity this year to capture some added value. Contact your county extension office and/or nutritionist to obtain additional information on creep feeding your calves this winter/spring and take advantage of this opportunity.