Wilkes County Center will be closed on Mon 01/18/2021 for the holiday. Due to COVID-19 protocol, please call ahead before visiting the office or call/email our staff members below (information @ Meet Our Staff).

Good Reasons to Test Your Hay

Find this article at:
go.ncsu.edu/readext?330851
— Written By John Cothren and last updated by Sam Lusk 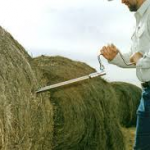 Do you wonder if your hay is of the highest quality? Forage quality is defined as the potential of forage to produce a desired animal response. It involves consumption, nutritional value, and the resulting animal performance. Hay quality includes palatability, digestibility, intake, nutrient content, and anti-quality factors. The primary reason for livestock producers to test their hay is to increase their net profit. Not knowing the forages nutrient composition might cause the producer to underestimate or overestimate nutrient requirements and cut profitability.

Forage testing assesses the nutrient composition of forages, allowing producers to develop feeding programs and commercial hay producers to develop marketing strategies. Because hay and other stored forages play a major role in winter-feeding programs, testing can tell you how to adjust the amount of protein and energy supplements necessary to meet animal requirements.

Baled hay – There are several methods for sampling baled hay. The best technique is to use a mechanical coring probe made specifically for this purpose. The serrated edge is placed on the side of a hay bale that is most resistant to puncture (usually the round side of a round hay bale or the small end of a square bale) and a sample is obtained by drilling with a brace. The sample should be as representative of the composition of the hay bales as possible. The process is repeated on several hay bales within the sampling lot. Hay from different fields or cutting times need to be sampled separately.

To correctly sample a rectangular bale, the bit is driven into the end of 15 to 20 bales from a particular lot of hay. Drill to the full depth of the sample tube on loose bales and half depth in tight bales. Mix the cores thoroughly and send the entire sample to the lab in a sealed plastic bag.

Large round bales should be sampled on the rounded side of the bale. Collect a single sample from each of 10 to 12 bales from the same lot, combining the core samples into one sample for analysis. If the outer layer of the round bale is weathered, pull away 1 to 2 inches and sample below. Drill to the full depth of the tube.

The first result given is Crude Protein. This is an especially important nutrient for young, growing livestock or gestating animals. Legume hays, such as alfalfa, generally have higher protein values than grass hays such as fescue or bermudagrass. Within a species, forages harvested at later stages of maturity generally have lower protein values. Protein will also be somewhat less on a hay that was exposed to rain or heavy dews during the curing process. Unavailable Protein refers to protein bound to fiber.

Acid Detergent Fiber is an indicator of the digestibility of the hay. For horses, higher ADF values mean decreased digestibility. Average ADF values for grass hay are around 30-37 %. ADF value greater than 40% indicates low energy content and low digestibility.