Find this article at:
go.ncsu.edu/readext?169679
— Written By John Cothren and last updated by JoAnne Gryder

Hardware disease may occur when sharp, heavy objects such as nails or wire are 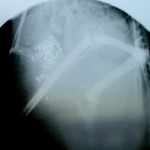 consumed by cattle. These objects fall to the rumen floor and are swept into the reticulum (another stomach compartment) by muscle contractions. A sharp object may puncture the reticulum wall and cause severe damage to and infection of the abdominal cavity, heart sac or lungs.

Prevention:
Cattle should be managed so that they do not have opportunity to ingest heavy, sharp objects. Keep pastures, paddocks and feed bunks free of wire, nails, fencing staples and other sharp objects (even heavy plastic items) that could be swallowed. Debris from structures and equipment may appear in areas where cattle graze after high winds. Deteriorating steel-belted tires also pose a risk. Place magnets on feeding equipment to catch some of the metal objects in feed. An intraruminal magnet can be inserted into the rumen to trap metal fragments. Ingested metal is drawn to the magnet instead of working its way through the stomach wall. The magnet eventually “fills up” if enough metal is ingested. Administer a second magnet if signs of hardware disease persist. Magnets are relatively inexpensive, particularly when compared to the cost of surgery.
Signs of hardware disease vary, depending on where the puncture occurs. Loss of appetite, depression, reluctance to move, arched back and indications of pain are common signs. The animal may grunt when forced to walk. Recurring bloat may be noticed on the upper left
side, with fluid accumulation on the lower right. If the heart sac has been punctured, fluid may accumulate around the heart and in the brisket. Fatal infection can occur if the object penetrates close to the heart.
Treatment:
It is often difficult to diagnose hardware disease, yet it is prudent to administer an intraruminal magnet when hardware cannot be ruled out. Confinement and feed intake limitation may allow puncture sites to heal in less serious cases. If infection is suspected, a broad spectrum antibiotic should be administered. Cattle with extensive infection in the heart or abdomen have a very poor prognosis and will often die of starvation despite attempts to encourage feed intake. In some instances, cattle suffering from hardware disease will respond only to surgery and physical removal of the object. These cattle may recover if infection is controlled after the object is removed.