If You Own Cattle, Watch Out for Those Wild Cherry Trees in Your Pasture!!

Find this article at:
go.ncsu.edu/readext?363645
— Written By John Cothren and last updated by Sam Lusk 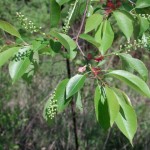 Following some of the rain storms and winds that have moved through our area recently, Ireceived a phone call from a farmer who had noticed that a large wild cherry tree had fallen down into a pasture paddock. His question was: 1) how long should cattle be removed from that paddock? And 2) as he cleaned up that tree from the paddock and leaves scattered across the paddock, could those leaves be harmful in a subsequent grazing pass?

The issue here is what is termed cyanogenesis, or the potential to produce cyanogenic or hydrogen cyanide (HCN) compounds, sometimes more commonly called prussic acid. Many plants in the Rosaceae (rose) family and specifically in the prunus genus, of which the wild black cherry is a member, have this potential. HCN is not found in the normal plant tissue state. It is only formed when plant tissue is damaged, through such mechanisms as chewing, frost, or damage to the tree that causes leaves to wilt.

Ruminant animals are very susceptible to poisoning from HCN. Research indicates that the lethal dose for sheep/cattle can be as little as 1 to 4 grams of plant material per kilogram of body weight, or since there are 2.2 pounds per kilogram, 0.46 grams to 1.82 grams of plant material per pound of body weight. To give this some perspective, there are 454 grams in one pound, so this is a small amount. For a 1200 lb cow, consuming 1.2 to 4.8 pounds of wilted black cherry leaves could be a lethal dose.

Signs of HCN toxicity can occur quickly, as soon as 15 to 20 minutes after ingestion. Typical signs are distress, followed by severe weakness to the point where the animal is barely able to stand, or even to the point of collapsing. Animals will exhibit rapid and labored respiration. If they have collapsed, there may be kicking/paddling of the legs and/or kicking associated with seizure like symptoms. This entire sequence can progress in 10 to 15 minutes with a high dosage of HCN and up to 45 to 60 minutes with a lower dose. Research states that if the animal does not die in the first hour, there is a good chance for recovery.

A cow could consume less than a lethal dose at various times throughout the day and survive, even though the total amount ingested during the day might add up to 4 or even 5 times a lethal dose. The critical element appears to be time, that is, separating each intake event with enough time for the HCN to be processed in the rumen.

Once HCN is formed in the leaves, as would be the case when either a limb from a tree breaks off or an entire tree is felled and the leaves begin to wilt, those leaves present a health threat to cattle. However, HCN is volatile, which means that it dissipates and is lost with time. In particular, once leaves are air dried and have turned brown, they will lose much of their HCN potential. Toxicity is more likely to be retained over a longer time period if environmental conditions are such that leaves remain green and do not dry out.

Alright, time to turn this information into a practical form. Getting back to the questions at the beginning of this article, once a tree or limb from a wild black cherry has fallen into a pasture; ruminant animals must not be allowed to eat the wilted leaves. If it can’t be completely cleaned up, remove animals until the leaves have completely dried up and turned completely brown. If, in the cleanup process some leaves are scattered in the paddock, do not let cattle back into the paddock unless the amount of wilted leaves is very minimal and scattered across a wide area or, better yet, the leaves are completely dried and brown.

Summer storms and wild black cherry trees can be a lethal mix for grazing cattle. Understanding the potential for HCN poisoning can help producers manage the risk.

Looking for our email lists?

We have a list of all of our e-mail newsletter offerings.