Tips on Keeping Your Hay From Going Up in Smoke

Find this article at:
go.ncsu.edu/readext?362362
— Written By John Cothren and last updated by JoAnne Gryder 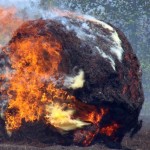 and feed replacement costs and in lost revenues. Every year a few hay producers have the unfortunate experience of having part or all of their hay destroyed by fire. There is no way to be absolutely certain that all possibility of a fire has been eliminated, but several precautions can be taken that are helpful in reducing the likelihood of a hay fire. Many of these fires are caused by the spontaneous combustion of hay that usually occurs within six weeks after baling.

Freshly cut forage is not dead; respiration (the burning of plant sugars to produce energy) continues in plant cells and a small amount of heat is released in the bale. Many producers refer to this elevation in bale temperature as “sweating” or “going through a heat.” In hay that is baled at the proper moisture concentration, plant cell respiration has slowed dramatically and will eventually cease. The heat generated by plant cell respiration in hay bales is normal and generally of little consequence. However, if bale moisture levels are too high (greater than 20 percent), the heat and moisture will provide a suitable environment for the growth and multiplication of mesophilic (warm temperature) bacteria that are present on forage crops. The respiration of mesophilic bacteria releases additional heat in the bale and interior bale temperatures can reach 130° to 140°F. At this temperature range, most mesophilic bacteria die and interior bale temperatures start to decline. This cycle of heating and cooling may occur several times during the weeks after baling as the microbial population increases and decreases. However, the maximum temperature decreases during each subsequent cycle. The interior bale temperature will eventually stabilize near the ambient temperature. Hay that has sustained these heat cycles has lost much of its quality as a feeding source, but is unlikely to catch fire. Baled hay becomes a potential fire hazard when the interior bale temperature does not cool after the first heating cycle. This occurs when the respiratory heat created by the mesophilic bacteria provides an environment favorable for the growth and multiplication of thermophilic (heat loving) bacteria. The thermophilic organisms multiply and the heat produced by their respiration can raise the interior bale temperature to 170°F before microbial activity ceases. The thermophilic bacteria and their respiration heat convert the hay to a form similar to a carbon sponge with microscopic pores. This damaged material combines readily with oxygen at high temperatures and can self ignite in the presence of oxygen.

have adequate drainage so water will not enter the barn and damage hay during storms. Protect

bales from ground moisture by placing them on a bed of gravel, old tires, poles, or pallets.

The temperature of hay that has been baled at a high moisture concentration should be checked twice a day for six weeks after baling. Research has shown that the maximum heating of hay usually occurs within one week of baling. Use a probe and thermometer to accurately determine the temperature inside a stack of hay. Check hay temperature in the center of the stacked hay. When hay temperature remains below 120 degrees Fahrenheit it is considered safe. The range between 120 and 140 degrees is considered a caution zone in which the hay should be closely monitored. Even if the hay does not catch fire, heating to this level reduces the nutritional value of the hay. If the temperature rises to 160 or above, a fire is likely.Fire is imminent if interior bale temperatures exceed 175°F and fire is present at temperatures greater than 200°F. Other symptoms of hot hay or an internal hay fire include a slight caramel or strong burning odor, visible vapor or smoke, a strong musty smell, and/or hay that feels hot to the touch. If any of these symptoms occur, call the fire department immediately. Let firefighters take control of the situation once they arrive. Do not move hay if signs of fire are present. Moving hay exposes the overheated or smoldering hay to oxygen and may cause the fire to burn uncontrollably.

Hay fires that usually occur within six weeks after baling are largely preventable. The risk of hay fire is significantly reduced by curing hay to less than 20 percent moisture concentration prior to baling. Hay temperature should be carefully monitored during the six weeks after baling. If the interior temperature of the hay stack is greater than 175°F, fire is imminent or present and

the fire department should be called immediately. Hay temperature should stabilize six weeks after baling and monitoring can be discontinued.