Find this article at:
go.ncsu.edu/readext?367876
— Written By John Cothren and last updated by JoAnne Gryder 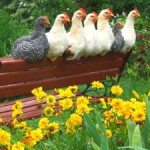 The N.C. Department of Agriculture and Consumer Services is requiring all poultry owners, regardless of the number of birds, to register for an NCFarmID number. This will facilitate the department in alerting poultry owners about an outbreak, especially owners in close proximity to a positive farm. Poultry owners can also sign up for a national premises ID number, but it is not required. Anyone already part of the National Poultry Improvement Plan is exempt from this requirement. An online sign-up form will be available after Aug. 1.

“In planning our response for highly pathogenic avian influenza, one problem we’ve come across is that we can’t protect birds that we don’t know exist,” Doug Meckes (State Veterinarian) said. “We need to know where poultry are located so we can properly protect commercial and backyard flocks.”

Information gathered through NC Farm ID registration is used solely for animal health purposes. This critical data will provide animal health officials with necessary contact information in case of an animal health concern, and help identify animals and premises that may have been affected.

The N.C. Department of Agriculture and Consumer Services is also requiring any commercial poultry grower with 200 or more birds to submit a HPAI outbreak plan. A commercial grower would be any grower under contract with an integrated company.

“It’s very important that growers think through the worst-case scenario, because a confirmation of high-path avian flu would certainly be a worst-case scenario,” Meckes said. “We want each grower to consider their resources and location to determine how they can best handle an outbreak in a way that is environmentally sensitive and gets them back online as soon as is feasible.”

An HPAI Outbreak Plan template will be available on the department’s website after Aug. 1. Growers will need to submit the plan to the Veterinary Division no later than Sept. 15. While only commercial growers will be required to submit the plan, all flock owners are encouraged to plan ahead and consider how they would respond to a confirmed positive.

Last month, Meckes and Agriculture Commissioner Steve Troxler announced that bird shows and sales would be halted from Aug. 15 to January 15, 2016. The intent is to prevent birds from commingling and spreading the HPAI virus. Individual sales are still allowed to take place.

For more information about avian influenza and the department’s response plans, go to www.ncagr.gov/avianflu.

Avian influenza (AI) is a highly contagious disease of birds which can be devastating for poultry growers, both backyard and commercial. AI is caused by a virus which occurs commonly in healthy waterfowl, but can cause severe disease in turkeys and chickens. AI is considered a Foreign Animal Disease (FAD) in the United States (US), which means that the government (both State and Federal) work to prevent the introduction of AI into commercial and backyard poultry flocks. Flocks that are confirmed positive for AI are depopulated and buried onsite. Sometimes growers are paid for depopulated birds, but it may be only a portion of the true value of the birds, and can result in severe economic loss for owners and producers of the diseased poultry flocks.