Find this article at:
go.ncsu.edu/readext?363940
— Written By Bill Hanlin and last updated by JoAnne Gryder

Some years I have problems with certain pests; and other years, I do not. This year, I am 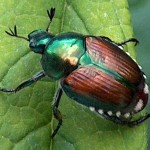 seeing very high numbers of Japanese beetles which are causing quite a bit of damage to my plants. So far, they have eaten most of the leaves on my cherry trees and have started to feed on my Asian pear fruit.

Normally I try to ignore this metallic green pest with the hope they won’t do too much damage. I sprayed my fruit trees this year in order to preserve some of the fruit for harvest. The problem with Japanese beetles is they are not too picky and will feed on leaves, fruit, and even blooms of different plants.

When Japanese beetles feed, they cause damage often referred to as skeletonization, which is basically eating all of the leaf tissue except for the leaf veins. Sometimes beetles will have done their damage and left, but if you see skeletonization it is a sure bet these beetles did the damage

Another problem with Japanese beetles is their young can also cause damage to lawns. Japanese beetle larvae, or grubs, live in the soil until they emerge as adults in June and July. These grubs will feed on grass roots and cause bare patches in the yard, so you never really get any relief from them.

On the bright side, Japanese beetles are relatively easy to control. Most insecticides are effective against both the adults and larvae. Try to avoid spraying plant blooms with an insecticide to prevent bee kills. Frequent applications may be needed as more beetles will arrive each day.

Japanese beetle traps do work in attracting and catching adult beetles, however do not place the traps next to plants that you do not want damaged. Traps attract many more beetles than they capture, so you will be bringing in beetles to the area. Also, be prepared to empty these traps on a regular basis since they tend to fill up quickly.

Looking for our email lists?

We have a list of all of our e-mail newsletter offerings.