How Important Is Cattle Temperament?

Find this article at:
go.ncsu.edu/readext?384393
— Written By John Cothren and last updated by JoAnne Gryder 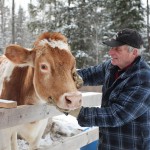 If you were to ask most cattle producers their number one criteria for culling a cow, they would likely say, “If she’s open,” and rightfully so. A cow’s job on your farm is to have a calf once every 365 days and if she’s running around open, she is just taking up resources and not giving you anything in return. A close second on the list of reasons for culling should be temperament. There are multiple university research studies that have shown that high stress cattle have decreased performance in growth, reproduction, and health. They also are more likely to injure you or themselves.

Research in Oregon has shown effects of temperament on reproduction in beef cattle. Over four hundred spring-calving range cows at two locations in eastern Oregon were tested for temperament using both a chute score and measurement of exit velocity from a squeeze chute. About 25% of the cows were scored as aggressive and these cows had lower pregnancy rates (89%) than the adequate temperament cows (95%). At one location, cows were bred by AI followed by turn out with a bull. The second location used natural service mating only. The lowered pregnancy rate even when bulls were used indicates that the effect was not due solely to stress during handling at AI. Based on this and other studies, the researchers suggest culling on temperament or adapting cattle to handling to maximize reproductive performance in beef cows.

Temperament is a moderately heritable trait that can be selected against and improved in your herd over time. High stress calves have lower feed conversion, slower growth, and also have a lower response to vaccinations given at weaning. There are also negative effects on carcass quality and marbling. Further, research studies reported that excitable temperament increases the incidence of dark cutters, decrease meat tenderness, and also increase percentage of bruised carcasses. Therefore, temperament affects carcass not only by reducing ADG and consequently carcass yield, but also directly alters meat quality.

While being a “good mother” can be an important trait in a cow for protecting her calf, being too aggressive can have some serious negative consequences. One option for quantifying temperament is to monitor cattle while being worked through the chute. A chute score is a 5-point scale (1 = calm, no movement, 2 = restless movement, 3 = frequent movement with vocalization, 4 = constant movement, vocalization, shaking of the chute, 5 = violent and continuous struggling) that can be assigned when cattle are in the chute. A similar scoring system can be applied to judge the speed at which cattle leave the chute. These can be effective methods of getting a feel of the whole herd, but most cattle producers are going to know their high strung cows and that’s a good place to start.

It is a much more enjoyable experience to own cattle and to work cattle when they are calm and easy going, and as mentioned before, it is certainly more profitable. So how can you make improvements in the temperament of your cattle? In the short term, the quickest way to make improvements is by practicing low stress handling techniques. Educate yourself on point of balance, flight zones, and moving cattle with your body position instead of relying on rattle paddles, hot shots, and other methods of forcing cattle to go where you want them to go. Their stress levels and yours are much lower when they think it’s their idea when they decide to move. Spend more time out with your cows by giving them a bucket full of feed a few times a week so that they associate seeing you with something positive and get used to human interaction. The long-term solution is to genetically select for docility.

Look at the cattle that you’re bringing onto your farm. Breed associations are now starting to provide a docility score on bulls, so that’s a good place to start. He’s responsible for 50% of the genetics on your farm each year! If you’re buying replacement heifers, make sure they aren’t the “high headed”, “high strung”, “excitable”, “CRAZY” type. Then go back and implement some of those chute side scoring systems to remove those outliers from the current herd. Eventually you will start to enjoy owning and working cows more, and you will see a reflection of that in your bottom line!