It’s All About That Colostrum!

Find this article at:
go.ncsu.edu/readext?383418
— Written By John Cothren and last updated by JoAnne Gryder 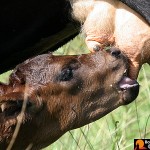 When raising livestock, the importance of high quality colostrum cannot be over-emphasized. Colostrum is so important that sometimes it is called “liquid gold.”

All mammals produce colostrum. It is the thick, yellowish “first milk” that is produced by the female after she gives birth (parturition). Colostrum is rich in energy, protein, vitamins and minerals. Most importantly, it contains maternal antibodies that help protect the newborn from disease pathogens during the early part of its life. Colostrum is produced for about 24 hours (plus or minus a few hours) after offspring are delivered.

The type of antibodies the colostrum contains depends upon the antigens to which the dam was exposed (by disease exposure or vaccination). Pregnant females should be kept in the location where they are going to give birth for at least 14 days prior to parturition. This gives them time to manufacture the correct antibodies for their specific environment.

All newborn mammals need colostrum. While it is possible for a newborn to survive without colostrum in a relatively disease-free environment, the likelihood of disease and death is much higher in newborns that do not receive adequate colostrum. Orphan newborns are often more susceptible to diarrhea and pneumonia because they did not consume enough high quality colostrum.

Newborn livestock have limited energy reserves and need rapid access to colostrum to maintain body temperature and survive, especially those born when it is cold. Colostrum is usually rich in vitamin A and helps to build stores in the newborn.

Colostrum is also the first source of Vitamin E for the newborn. The iron content of colostrum is 10 to 17 times higher in colostrum than normal milk. Colostrum also has laxative qualities and helps to eliminate fecal matter in the newborn’s digestive tract.

Research has shown that livestock vary in the quantity and quality of colostrum they produce. Younger females tend to produce less colostrum than mature females. Inadequate nutrition during late pregnancy can reduce the quantity and quality of colostrum. Newborn livestock should nurse as soon after birth as possible in order to receive adequate colostrum. Antibodies are large protein molecules that can only cross the intestinal wall and enter the bloodstream of the newborn during the first 24 to 36 hours of life. Absorption is most efficient the first few hours after birth.

It’s important not to confuse colostrum “supplements” with colostrum replacements or substitutes. Be sure to read the labels carefully. A colostrum product that is unable to raise the blood concentration of immunoglobulin-G (IgG) above the species standard is called a colostrum supplement. Milk replacer is never a substitute for colostrum. It should not be fed until the newborn has received adequate colostrum, usually over 24 hours of age.