Find this article at:
go.ncsu.edu/readext?385682
— Written By John Cothren and last updated by Sam Lusk 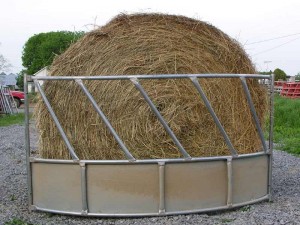 It’s almost time to start feeding hay and thinking about how to minimize hay loss with proper feeding management. Hay loss due to feeding can range from two to sixty percent. The more time and energy put into managing hay feeding, the less hay and money that will be wasted. There are a number of factors that affect the amount of hay lost, including feeding method, interval between feedings, amount fed, the number of animals being fed, weather conditions, the method of storage, and overall hay quality.

Hay should be fed on well drained areas. Distributing hay on pasture land rather than concentrating the feeding traffic in one area will be beneficial to your pasture. This allows for animals to exhibit natural grazing habits and distributes their manure uniformly, improving soil fertility. This method usually works best if feeding hay daily or every two days. If hay is fed using hay rings, feeders, or racks that are moveable, choose a new area each time you put out a new bale. This will limit the amount of damage done to one area of the pasture and will also help distribute manure.

The greatest amount of hay loss occurs when animals are given free access to hay. They will trample, over consume, and contaminate between twenty-five to forty-five percent of the hay. Limiting animal access to hay will help limit waste. Feeding hay daily and matching the amount of hay fed with nutritional needs will also help decrease loss. Daily feeding will force the animals to eat hay they might otherwise waste. This requires a higher labor input, but will save the most hay and money.

If feeding daily or every other day is not an option, using hay rings, racks, and feeders will help limit animal access to hay and help decrease hay loss. Using feeders that keep the hay up off the ground limits the amount of loss due to trampling and fecal contamination. Hay rings with panels along the bottom also help limit loss due to trampling and fecal contamination because less hay will fall out the bottom. When using hay racks, rings, and feeders, it’s important to keep in mind the amount of space around each feeder; make sure there is enough space for each animal to get to the hay easily.

Hay bales should be separated into lots according to their quality. The highest quality hay will be the most valuable and should be fed with the most care. The animals with the highest nutritional needs, such as young calves, yearlings, bred heifers, and lactating cows, should be fed the highest quality hay. Lower quality hay should be saved for animals with less nutritional needs, such as mature, dry pregnant cows, and bulls when not in breeding season. This allows hay quality to be matched with the livestock’s needs. Hay stored outside should be fed before hay stored inside because hay stored properly inside will last longer than hay exposed to Mother Nature.

Determine what will work best for your operation to limit hay loss this winter.