What Is One of the Most Important Trace Minerals for Cattle? Copper!

Find this article at:
go.ncsu.edu/readext?390067
— Written By John Cothren and last updated by JoAnne Gryder 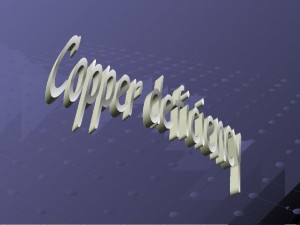 every year. Aside from the obvious losses resulting from dead animals and medical costs, there are added losses from a lack of efficiency and productivity. These may manifest in poor feed conversion, sub-optimal weight gains and/or milk production and increased days open.

It is widely known that trace mineral nutrition directly influences immunity in cattle. Proper mineral supplementation can help enhance an animal’s immunity. A cow’s mineral requirements are influenced by many factors including age, breed, stage of production, presence of antagonists in the diet, and level of overall stress. While many trace minerals perform important roles in immune function, copper stands out as especially important.

Copper is needed for proper immune development including the formation of antibodies and white blood cells in addition to antioxidant enzyme production. Copper deficient cattle are more susceptible to infections and do not respond as well to vaccinations. In addition, they tend to be less resistant to parasitic challenge. Studies have shown that cattle receiving proper copper nutrition tend to be less susceptible to infections and have less severe infections when disease does occur.

Copper (as well as zinc, selenium, manganese and vitamin E) is also involved in antioxidant activity that protects cell membranes from damage caused by free radicals. Free radicals are electrically imbalanced molecules that attack healthy body tissues. Free radicals are the natural by-product of immune responses within the body. Antioxidants act to neutralize free radicals before they can cause damage. The need for antioxidants increases with disease or injuries, and stress of any type. Symptoms of inadequate antioxidant activity include poor stress tolerance, more frequent infections and poor wound healing.

Acquired immunity results from interaction with a specific foreign invader (either by natural exposure or vaccination). Foreign molecules (antigens) stimulate the body to produce specific antibodies against the invader. Copper deficiency, in general, reduces the effectiveness of the acquired response. Antibody production is significantly reduced in copper deficient animals. For this reason, copper nutrition is an essential component for the success of vaccination programs in cattle. Calves may be deficient at levels that affect immunity without displaying clinical signs of deficiency.

The ability to mount an immune response does not develop immediately in newborn animals. Therefore, the calf is dependent on its dam for immune protection. The calf receives antibodies from its mother through colostrum thus conferring what is known as passive immunity. Calves that receive adequate colostrum within the first 24 hours will receive passive immunity benefits for the first 3 to 5 weeks of life.

Proper copper nutrition in pregnant cows is critical to the immune health of newborn calves. Research has shown a significant transfer of copper from the dam to the fetus during the last trimester of pregnancy. Calves have a high copper demand during the first few months of life. Newborns are very dependent on copper acquired during the prenatal period since milk is a poor source of copper. Additionally, copper status in the dam is critical to the production of high quality colostrum. As mentioned above, copper-deficient animals produce fewer antibodies. Calves born to copper deficient cows experience increased death losses, reduced growth and poor production efficiency.

In summary, copper is essential for the development and maintenance of a healthy immune system. Cattle readily show copper deficiency symptoms including: discolored hair coats (red tinge on black hair or loss of pigment around the eyes), slow to shed out of winter coats, depressed immunity, decreased conception rates, increased days open, and hoof problems.