Try to Avoid Planting Invasive Plants in Your Landscape

Find this article at:
go.ncsu.edu/readext?400647
— Written By Bill Hanlin and last updated by JoAnne Gryder 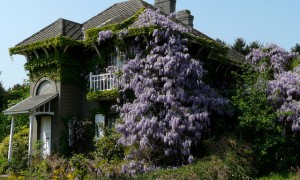 something that will cover the ground quickly. Over the years, some of these plants have been uncontrollable and eventually become a nuisance – kudzu being a prime example. Plants chosen strictly on their beauty, aggressiveness or perceived usefulness can cause more headaches than they are worth. The following are a few common local plants that should be avoided.

English ivy is a native of Europe and is often planted because this vine is a fast growing ground cover. The problem with English ivy is that it will not only cover the ground but also will climb trees and fences. This ivy can choke out other plants and destroy habitat needed by wildlife.

Royal paulownia, or princesstree, is fairly common in the area and its spring blooms are often mistaken for wisteria. Planting royal paulownia was encouraged in the 1990’s because the wood was in demand in Japan and the trees grew really fast. Since that time, the tree has spread by windswept seeds and is now considered invasive.

Speaking of wisteria, Chinese wisteria was introduced to the United States in the early 1800’s and was prized for its beautiful blooms and weeping characteristics. Since that time, however, the aggressive nature of this plant has made it an invasive species. If you really want a wisteria in the landscape, then consider American or Kentucky wisteria.

In the 1930’s, the US Soil Conservation Service promoted the use of multiflora rose as a way to control erosion. Multiflora rose was also used as a natural fence for livestock because of its tendency to grow in dense, impenetrable hedges. Anyone that has any experience with this plant knows that it can be a difficult plant to eradicate.

As you can see by the list I have given you, if the plant grows or spreads quickly, then it has the potential to become invasive. Even common plants like periwinkle and pachysandra have the potential to get out of hand. Do a little homework before putting anything in the landscape that could cause problems later.