Find this article at:
go.ncsu.edu/readext?559624
— Written By John Cothren and last updated by Sam Lusk

As most producers experienced their first frost last weekend, another potential dangerous crop to ruminant animals is Johnsongrass. Johnsongrass is a warm-season perennial grass that spreads by underground stems called rhizomes and seeds. Seed production is very prolific and can lay dormant for 15-20 years before germinating. Many questions asked about Johnsongrass are related to the control of and the possibilities of it being poisonous to farm animals. The fact is that, yes, Johnsongrass can be toxic to our livestock, but only under certain conditions. Not just Johnsongrass, but also its cousins, sudangrass, milo, and sorghum-sudangrass fall into this potentially lethal category. Wild cherry trees can also produce toxic levels, and poisoning occurs most often when animals consume wilted leaves after trees have been damaged by storms or pruning. 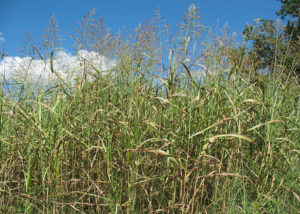 So the question is when is Johnsongrass toxic? The short answer is it is toxic when it is under stress. Well, that doesn’t mean a lot to most people, so the longer answer is as follows.

Where we have the most potential for problems with Johnsongrass in our area is at frost time. If we have a ‘killing’ frost, then it is toxic for about 72 hours, or 3 full days. If we have a ‘burn back’ frost, then it can be toxic for up to at least 10 days, possibly longer if more burn back frost occurs. The reason is that the burn back frost puts the plant under, you guessed it, stress. And obviously, a killing frost that kills back the aboveground part of the plant is going to be stressful to the plant as well.

The reason for this situational toxicity is that when the plant is under stress, it produces a chemical called prussic or hydrocyanic acid (HCN), or more commonly called cyanide. Smaller, younger growth of the plant, especially those plants that are less than a foot tall produces much more of the toxin than do older, more mature plants,.

Ruminant animals (cattle, sheep, and goats) appear to be the most susceptible to prussic acid poisoning. Reports of poisoning in swine and horses are rare. Also, younger calves that are still nursing are much more susceptible to this toxin than are older, more mature cattle; although older cattle can be poisoned if they eat enough of the plants. Drinking soon after eating these plants raises the likelihood of poisoning.

Symptoms of prussic acid poisoning include anxiety, progressive weakness, and labored breathing, gasping, increased pulse rate, muscular twitching and convulsions, and death may follow rapidly when lethal amounts of HCN are consumed. However, the dead animals may be found without visible symptoms of poisoning. Animals affected by prussic acid poisoning may be treated with a sodium nitritesodium thiosulfate combination. It must be injected intravenously and very slowly. The dosage and method of administration are critical. Consult a veterinarian to correctly diagnose prussic acid poisoning and to determine the proper treatment. As we all know Johnsongrass is very hard to eradicate in our pastures, so the bottom line is if you have Johnsongrass in your fall pastures, and we get a killing frost, pull the cattle out of that field for 3 days. If we have a burn back frost, take them out for at least 10 days, or until we have a killing frost, then 3 days from that frost.