Find this article at:
go.ncsu.edu/readext?723789
— Written By Eli Snyder

Has this gardening season left you “dirt tired?” Has all the weeding, harvesting, and preserving left you feeling weary of a fall garden? If so, consider planting a cover crop in spots where the soil would otherwise be bare over the winter. Cover crops are any crop that we plant but do not intend to harvest; they are planted during seasons when a “cash” or harvested crop is not growing. Their residues are returned to the soil to promote soil health.

I know planting anything right now sounds like work, but think of it this way: cover crops are your plant friends who will be working for you over the winter. All you have to do is plant them. Cover crops are beneficial to any garden because they:

– catch extra nutrients or fertilizer that were not utilized by garden crops. The nutrients are then returned to the soil through the cover crop residues.

-help build organic matter in the soil, which improves water holding capacity of soil and fertilizer efficiency. Over the long-term, this means less fertilizer is needed to generate a productive garden, and soils will become more resilient during dry periods.

-provide habitat for beneficial insects such as ground beetles, and pollinators if left to flower.

-add diversity to our garden, which can disrupt pest and disease cycles.

Cover crops can also generate nutrients. For instance, plants in the legume family such as clovers, peas, and beans will fix nitrogen in their roots, thereby adding it to the soil for use by cash crops and reducing the need for fertilizer. In some instances, cover crops can and suppress weeds.

Choose a cover crop that aligns with goals you may have for your garden. A legume crop will add nitrogen to the soil which can be utilized by a subsequent crop. A grass or Brassicaceae (cole or mustard) family cover crop will scavenge leftover nutrients in the garden soil at the end of the season. Mustard family species can sometimes suppress diseases and root knot nematodes. Daikon radishes (also called forage radish) can break up hard or compacted soil and promote nutrient mixing through the soil profile. Certain species like cereal rye generate a lot of biomass when allowed to grow up in the spring, adding a substantial amount of organic matter to the soil when added back through mowing, tilling, or composting.

Some species such as oats and radishes will die (i.e. winter-kill) in our climate some years. These are good cover crops for beds that will be planted in the early spring. Cover crops can also be grown in the summer between crops; buckwheat, millet, cowpeas or field peas, soybeans, and sunn hemp are popular warm-season cover crops. 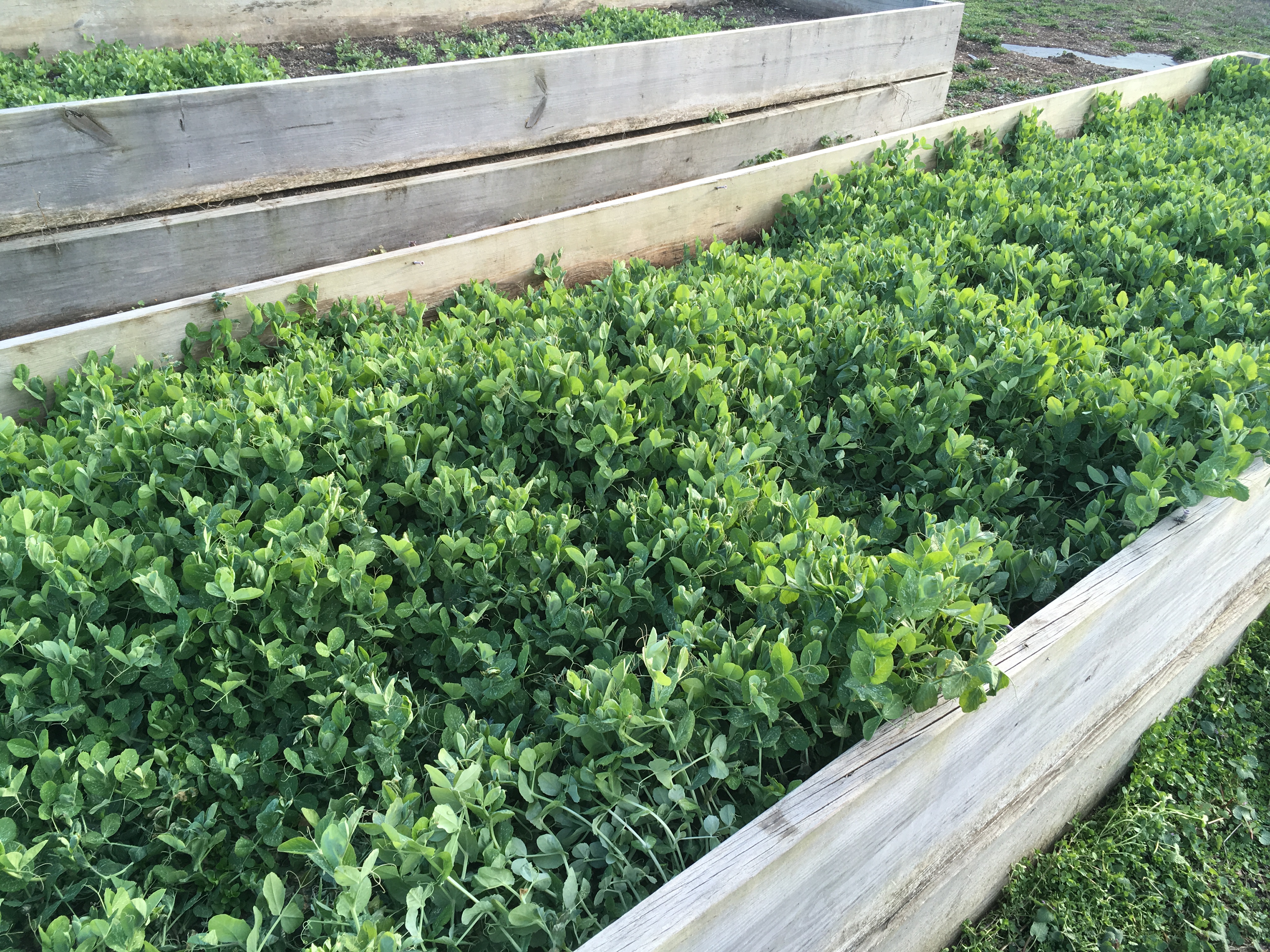 Legumes such as clover, peas, and vetch fix nitrogen, which can help reduce fertilizer needs in the garden.

Planting a mixture of cover crops provides multiple benefits. Grass and legume, and grass-legume-brassica mixtures are popular. One popular mixture for winter is cereal rye and hairy vetch (an annual legume) or crimson clover. Because rye can be difficult to manage in-home gardens owing to its vigorous root system, I recommend oats and Austrian winter pea as an alternative to this mix. These mixtures produce a large amount of growth and fix a lot of nitrogen in a relatively short period of time. Adding daikon radish to a mixture like this can additionally serve to break up soil compaction.

Cover crops can be planted as soon as a cash crop is removed from its section of the garden, or by “intercropping” (also called “relay cropping”), when cover crops are planted between rows of cash crops before they are removed. Prepare a seedbed as you would for another direct-seeded crop by tilling or raking the soil. Seed the cover crop at recommended rates with a broadcast seeder, a precision seeder, or by hand. Rake in broadcasted seed to reduce predation by birds, small mammals, and insects. You can also make furrows with a trowel or rake, sow seed, and then cover the seed with soil by hand or a rake.

The best time to sow winter cover crops for good winter coverage is August through mid- September. However, if you are delayed, you can sow grasses such as winter wheat into October and cereal rye into November.

There are a few options for terminating the cover crop and preparing the garden for spring planting. You should start thinking about this 4-6 weeks before you want to plant. One option is to apply a non-selective herbicide such as glyphosate when temperatures average above 55 degrees F. Or, mow the cover crop can low to the ground, or use a homemade crimper to crimp the cover crop down. The crimping method will only work if the cover crop is flowering. 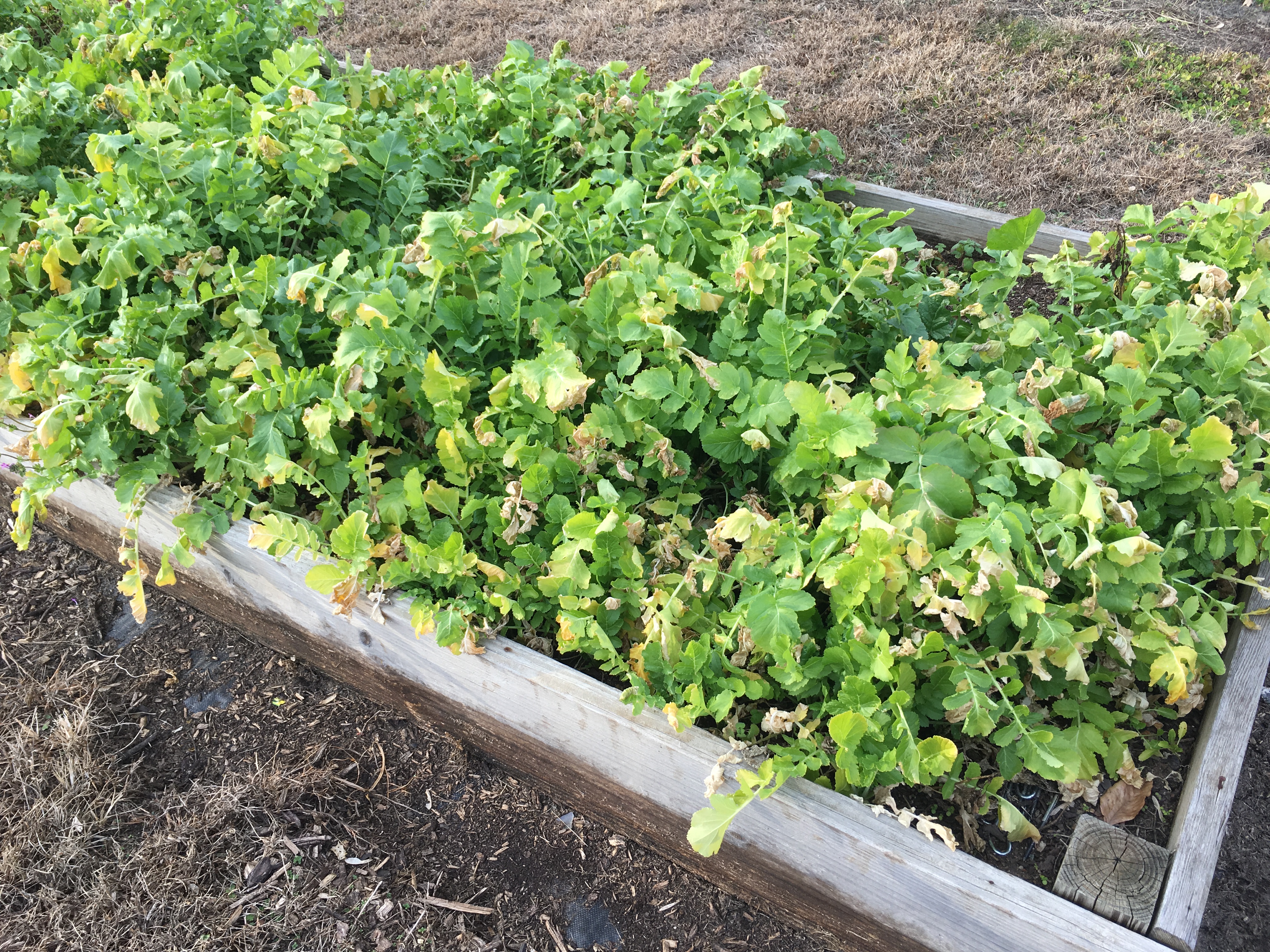 If you mow or crimp the cover crop, I recommend placing a tarp over the residue for approximately 4-6 weeks afterwards to encourage breakdown of the crop residue. This will make tilling in the residue easier, or may even leave a bed clean enough for planting into. You can also do this if you have used herbicide to encourage residue breakdown- place the tarp on 2 weeks after application. Finally, you can also remove the cover crop reside and place in a compost pile. The compost can then be added back to the garden soil. 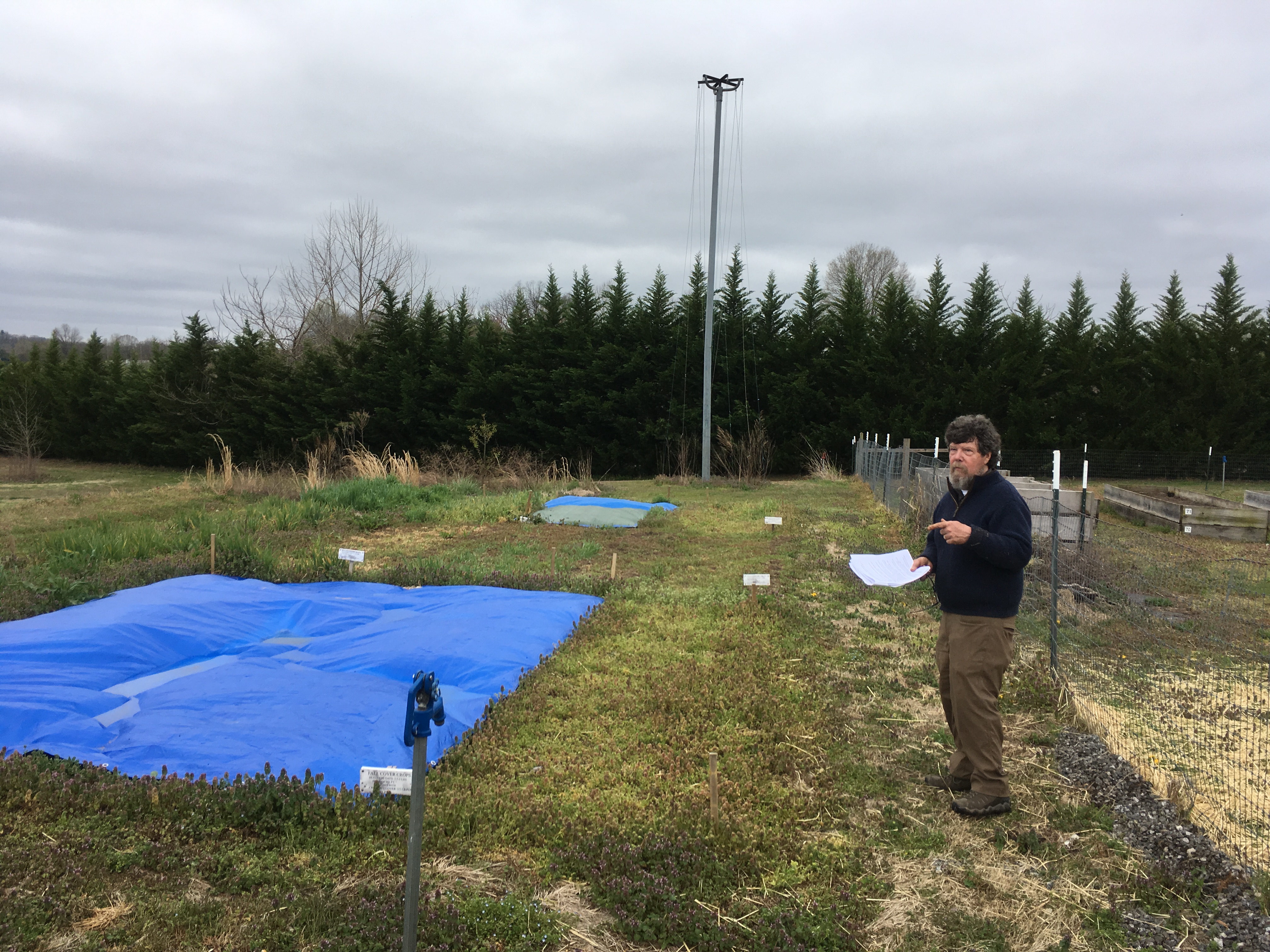 Covering cover crops with a tarp for 4-6 weeks can help cover crop residues breakdown before planting.

Planting a cover crop requires an investment of time, planning, and money, so it is best to manage it well to reap the maximum benefit from your investment. An optimal cover crop stand may need to be fertilized, and irrigated to ensure germination and good growth, just as you would a cash crop. Legumes should be sown with inoculant to ensure nitrogen fixation. Cover crops can help us build much more productive gardens, lead to better crop performance in times of stress, and reduce the need for fertilizer and pest management inputs. They are a small investment with great potential for payback.