Pests in the Fall Vegetable Garden

Find this article at:
go.ncsu.edu/readext?728784
— Written By Eli Snyder

Because fall gardening season starts out relatively warm, and after a season when insects have had time to emerge from overwintering, mate, and reproduce, insect pests in fall gardens can be abundant. It is important to manage these pests early on to protect your crops while crops are young and vulnerable, and to keep insect populations low. As temperatures cool, the insects will slow down, and some will retreat to their overwintering sites. Read on for some tips on common pests of fall vegetable gardens.

Like spring, fall is another time when flea beetles may feed on different garden plants. Flea beetles are small beetles that feed on leaves and also roots of different plants. In the fall, we tend to observe flea beetle damage on cabbage family crops, favorites of the crucifer flea beetle and the yellow-margined flea beetle. Flea beetles leave small round holes in leaves, sometimes with a silver circle lining the holes. They can be controlled with common garden insecticides such as pyrethrin. 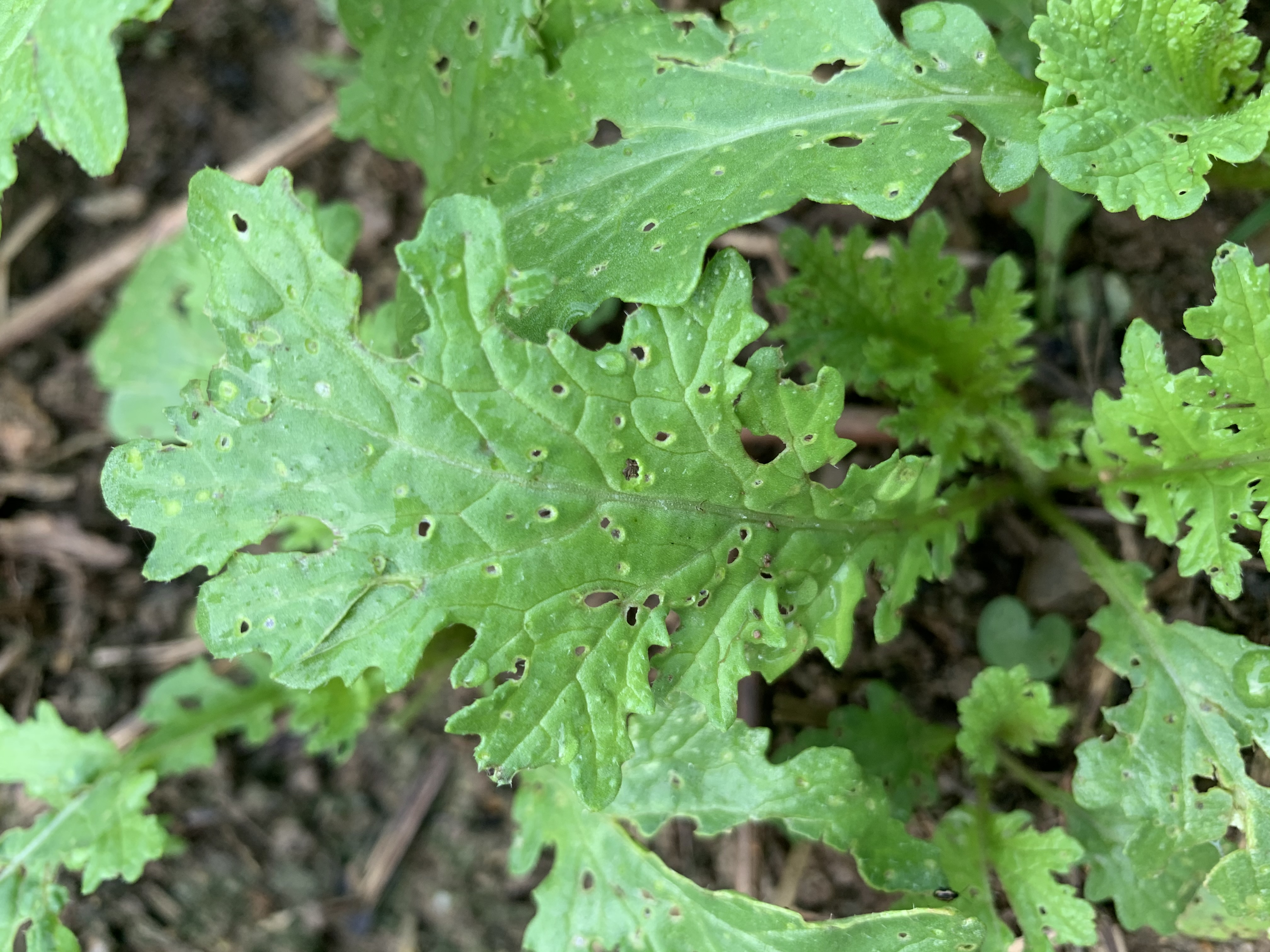 Flea beetles leave small round holes and prefer crops with non-waxy leaves such as arugula, mustards, and turnips.

As temperatures get cooler, and in particular if we continue to see ample rainfall, you may find slugs feeding on various plants in the garden. They are especially fond of tender-leafed plants, such as lettuce and mustards, and can be a real menace to young germinating plants. Look for irregular feeding patterns and slimy trails on leaves to indicate slug activity. Slugs are attracted to cool, damp, dark places so may be problematic in areas with heavy ground cover or mulch. They are mollusks, not insects, so traditional insecticides are not effective in controlling them. Baits with the active ingredient iron phosphate are effective in controlling them. You can also trap slugs by placing pieces of cardboard in the garden and lifting them up in the early morning. You may find slugs have congregated there and you can remove them from your garden easily. Some have also reported success in trapping them with cups of beer.

Harlequin bugs are difficult to control true bugs that have piercing, sucking mouthparts. They prefer to feed on members of the cole crop or Brassicaceae family. They are orange and black and their shape resembles that of a stink bug. They suck nutrients out fo the plant leaves, leaving behind unsightly white spots. Difficult to control with insecticides, it is best to look for and destroy egg masses on the undersides of leaves. They are round, white and black, roughly resembling 8-balls used in pool. 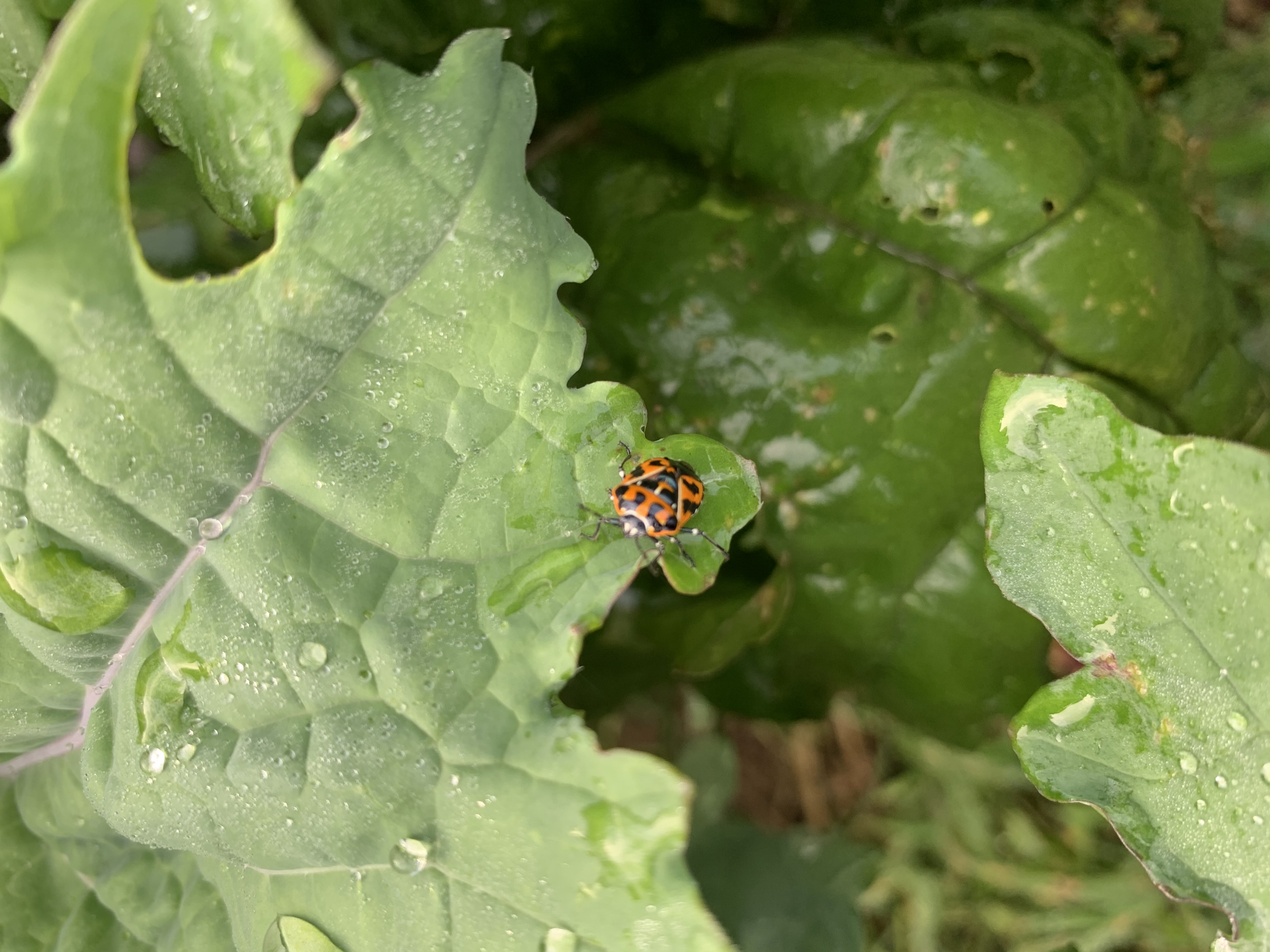 There are several caterpillars that may affect different plants in your garden in the fall. Several species of cabbageworm, diamondback moth caterpillars, and cabbage webworms may be seen on cole crops. They usually feed on the leaf tissue, and can sometimes strip all the leaf tissue around the mid rib, severely affecting plant growth. Different species of armyworm may be found on various garden plants including tomatoes, mints such as basil and peppermint, hemp, and other plants. You’ll sometimes seen a sign of them first they’re fresh or excrement, before you see the caterpillar itself. The species are controlled well by insecticides with the active ingredient Bacillus thuringensis or Bt. Popular products include DiPel and Thuricide. 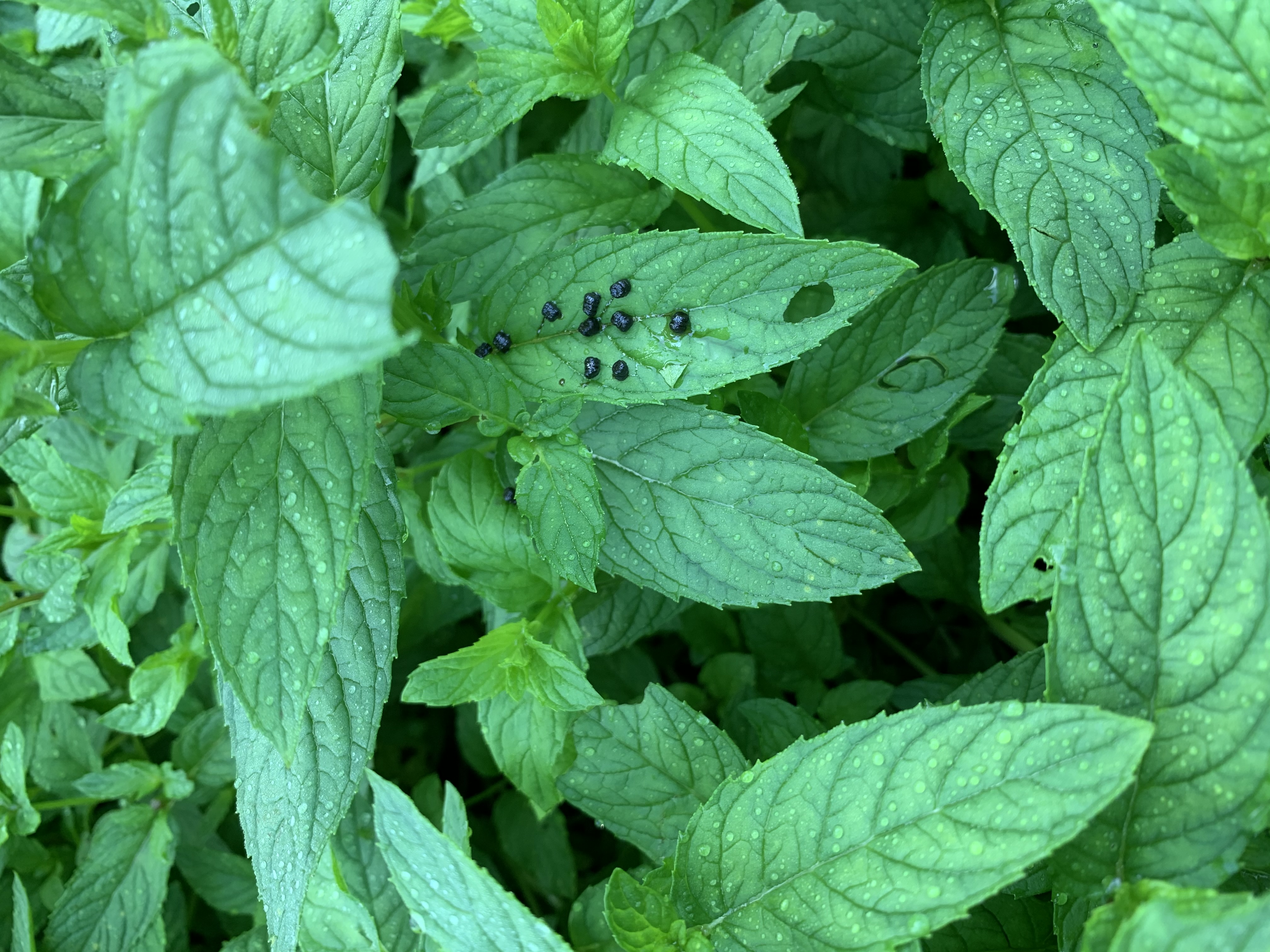 Perhaps the most notorious of fall pests is the Brown Marmorated Stink Bug. Most adults have emerged in Wilkes County this year by now, and so stink bugs may be found feeding on corn, tomatoes, apples- they love Granny Smith-, peaches, peppers, and other crops. Like the Harlequin bug, they use their piercing-sucking mouthparts to feed on fruit and leaf tissue. Brown Marmorated Stink Bugs are a relatively new, invasive pest in the United States, and are a difficult to control without powerful insecticides such as those with the active ingredients bifenthrin and carbaryl. Be sure that any chemical you apply is labeled for controlling stink bugs on a particular plant, and follow label instructions to reduce impact on pollinatros.

Handpicking can also be an option for those who prefer not to spray or who do not have very valuable plants they want to preserve. Try handpicking in the morning, placing stink bugs inn a bucket of soapy water. Most know that in a few weeks once the weather cool down, they will congregate on the sunnyside of homes and attempt their entry for the winter. While they cause no harm inside a home, they are a nuisance. Prevent home invasion by caulking windows, weather stripping entry doors, and securing other possible points of entry such as crawlspaces.

Sorry! We haven't gotten there just yet.

This county has not yet activated their e-mail sign-up form. However, you can still subscribe to other Extension Topic sites.