Want to Improve Your Cattle Handling Skills? Put Yourself in the Cow’s Shoes

Find this article at:
go.ncsu.edu/readext?384994
— Written By John Cothren and last updated by JoAnne Gryder

Everyone involved in beef cattle production will, at some time, work cattle. Sound handling practices will affect the well-being of cattle, individual animal health, and herd productivity. These practices are the result of decades of practical experience, research, and, most important, common sense.

Unfortunately, working cattle can be a source of stress for you and your animals. Stressed cattle will have a poorer performance and a greater risk of health problems than non-stressed cattle. 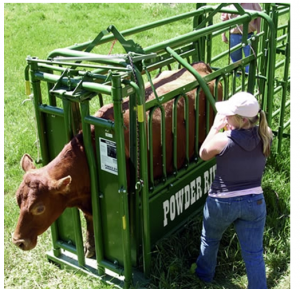 The secret to LSCH is understanding why cattle act the way they do and then using that knowledge to “ask” and not force them to do what you want. We also want our facilities to help us do our work better and not be a barrier. However, even well-designed facilities will not make up for poor handling skills and a lack of cattle behavior knowledge.

Cattle see the world differently than we do. Because they are prey animals, their eyes are shaped differently and are located on the sides of their heads. A cow can see up to 300 degrees around itself, whereas a human has roughly a 140-degree field of vision. Cow eyes are more rectangular while our eyes are round, and their pupils are slitted rather than round. They see most things with only one eye and therefore don’t have good depth perception. Cattle cannot see directly behind them and worry when people are in their blind spot. Cattle also have limited vertical vision and have to put their heads down to see the ground in front of them. Their vision limitations mean that a shadow across an alley will stop them in their tracks, or a quick motion detected out of the corner of one eye will send them running. When they are a safe distance away, they will turn and face the disturbance so they can get a better look with both eyes. Cattle can see a lot but don’t see it well. Cattle do have keen hearing, and any loud noise especially angry people’s voices are very disturbing. In fact, research has demonstrated that people yelling can be more stressful than even the use of a hot shot. However, cattle have difficulty pinpointing where the sound came from. All loud noises will frighten animals, even if we understand that the noise should not be an issue. Cattle have a sensitive sense of smell, though they rely more on vision.

Instincts are those things that we all do because we are hard-wired to do them. We jump or startle at loud noises, for example. Cattle are prey animals and find safety in numbers. An isolated or single animal becomes distressed just because it is by itself. Cattle will take their time to slowly explore anything new in their environment. The coat flapping on the side of the chute is a BIG deal to them and is translated to mean danger. When cattle move, they like to follow one another, partly because they then don’t need to look where they are going (remember, they cannot see their feet without putting their heads down) and partly because they are staying with the group. Other behavioral characteristics include a preference to move toward areas with better lighting and uphill instead of downhill.

Experience rounds out why cattle act the way they do. They can quickly learn that a tractor and wagon mean feed. They can also learn that being chased somewhere usually leads to increased fear and distress. Cattle are more distressed by being sorted out to go single file up a chute with people hollering at them than they are by the vaccination they get while in the chute. It is extremely important that we make cattle’s first experience with handling or new environments as stress-free as possible so they are willing to do it again and even easier the next time.

The secret to asking cattle to move instead of forcing them is understanding the flight zone and point of balance concepts. Cattle, like people, have their personal space. When someone, especially if that someone is scary gets too close, we want to move away. It was our decision, and if the scary person doesn’t follow, we don’t feel any stress. The same is true with cattle (remember, our round, close-set eyes tell cattle we are predators). If we get a little too close, just inside their flight zone, they will move away as if we asked them to move. If we try to push too hard, there is a good chance they will try to run back by us. Neither cattle nor people want to be forced, and our/their first reaction is to force back.

The golden rule of low-stress handling is slow and quiet. Less stress for you and the cattle.