Blackleg in Cattle Is Usually Fatal! an Ounce of Prevention…Vaccinate!!

Find this article at:
go.ncsu.edu/readext?419597
— Written By John Cothren and last updated by JoAnne Gryder

Blackleg has been recognized as a livestock disease since before medieval times, and today we often use the term loosely to describe several diseases caused by organisms in the Clostridium class of bacteria. However, there are more than 60 different types of Clostridium bacteria, and not all cause disease.

What we commonly call blackleg is a highly fatal infection caused by Clostridium chauvoei, resulting in a gas gangrene in the muscle of young cattle, usually occurring between 4 months and 2 years of age. Blackleg seldom affects cattle older than 2 years of age, most likely due to immunity induced by vaccines or natural exposure. However, sporadic cases do occur in cattle older than 2 years and are often associated with the reuse of needles for multiple injections. Blackleg can also be a problem in cattle less than 4 months old that do not receive adequate passive immunity through colostrum. Some of the other clostridial diseases are not as restricted to younger animals as is seen with blackleg.

Clostridial bacteria are found in the soil virtually everywhere that livestock have been kept. In the presence of oxygen, the bacteria form spores that allow them to resist environmental changes and survive in the soil in a dormant state for years. Animals are infected by ingesting feed or pasture contaminated with clostridial spores.

Certain environmental conditions can aid transmission of clostridial bacteria. Animals that die from blackleg or other clostridial diseases can seed the environment with clostridial spores; therefore, these animal carcasses should be burned or buried in deep pits. Blackleg and clostridial disease outbreaks are often associated with land excavation or flooding that causes large amounts of spores to resurface.

The exact disease process of blackleg is not completely understood, but it often occurs in calves growing rapidly on a high plane of nutrition. Once ingested, the bacteria can sometimes pass through the intestinal wall, enter the bloodstream, and be deposited in muscles or other tissues. Under certain conditions, the bacteria proliferate rapidly, producing toxins that cause muscle death and eventually death of the animal. Blackleg often occurs with no history of open wounds, although bruising or excessive activity precipitate cases due to the resulting muscle damage. The muscle damage creates an environment that is devoid of oxygen and conducive to replication of Clostridium chauvoei in the damaged tissue.

A calf with blackleg will often be depressed and have swelling of a muscle or group of muscles. The skin will sometimes be discolored and may “crackle” when it is touched. If the muscle is cut into, it will contain dark areas, hence the name blackleg. The cut tissue will often contain a foul-smelling liquid and gas, which is formed by the clostridial bacteria in the muscles. Sometimes the animal will appear lame on the affected leg before any other sign is noticed. The infection can occur in areas other than leg muscle, such as in the tongue, diaphragm, udder, or brisket. Because the disease develops over a short period of time (12 to 48 hours), calves with blackleg are often found dead without any prior signs of trouble.

Some calves may recover if treated very early in the course of blackleg with appropriate doses of an antibiotic, such as penicillin. However, since blackleg develops so rapidly, most affected animals are not able to be treated at all, and those that do receive treatment are often too debilitated to recover, so treatment is rarely successful. The best approach by far is to ensure that cattle are vaccinated against blackleg and the other major clostridial diseases that occur in a particular area. 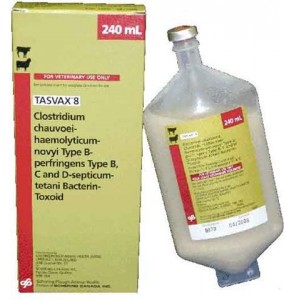 It is not possible to prevent clostridial bacteria from being present in the soil, but it is possible to vaccinate animals to prevent the occurrence of the disease. Clostridial vaccines are very effective if given to young, healthy animals in time for them to increase their immunity before being challenged by the disease.

Because all blackleg vaccines are killed, or inactivated, it is critical that animals receive the initial primary and booster vaccination according to label directions. A single blackleg vaccination will not provide adequate protection. If blackleg has been a problem on a farm, a veterinarian may recommend vaccinations of newborn calves, but this is typically not necessary on most farms. Up until 3 to 4 months of age, calves are protected if they absorbed adequate colostrum from their dams within a few hours after birth. However, when they are 3 to 4 months old, they become susceptible to the disease, so all calves should be vaccinated for blackleg by 4 months of age. A re-vaccination 3 to 6 weeks later according to product label directions is necessary to provide the best protection. Delaying vaccination until a calf is older can be inviting disaster, and even if a newborn calf was vaccinated for blackleg, it will need to be re-vaccinated at 3 to 4 months of age.