ATV Safety on the Farm

Find this article at:
go.ncsu.edu/readext?400194
— Written By John Cothren and last updated by JoAnne Gryder 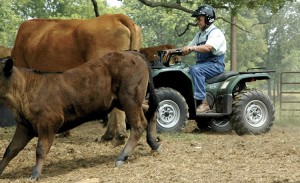 When all-terrain vehicles (ATVs) first appeared in the United States in the 1970s, they were promoted and sold as a recreational vehicle designed to provide “thrills” for the rider. Sport and recreation operators found that the ATV was a useful machine to move through areas not accessible with pick-up trucks, four-wheel drives or other motorized vehicles, and the ATV became a popular hunting vehicle.

The ATV has also found many uses in agriculture as a substitute for pick-up trucks, horses, and, even walking. The ATV is now found on all types of farms and ranches, in orchards and forests, in ornamental nurseries and on golf courses.

ATVs are used to inspect crops and livestock; to inspect and repair irrigation systems and fence lines; to fertilize and apply chemicals; to supervise field crews; to herd livestock; to mark timber; to mow grass; to move dirt; and to transport things from here to there and back again.

Handling and moving cattle can be done from horseback, on foot, or with the use of an all-terrain vehicle. When using an ATV, scan ahead and to the side for obstacles, uneven terrain, vehicles, people, and animals. Reduce your speed. Pay attention to hazards such as guy wires and barbed wire fences; they are low profile and difficult to see. When gathering livestock, the ATV rider often concentrates more on the animals than on the terrain. Failure to watch changing terrain or to look for unexpected obstacles can lead to a serious injury. Loose wire lying in a pasture, in brush, or on vines can pull feet from footrests, resulting in an injury. Tall grass in pastures can hide such obstacles as holes, stumps, and rocks from a rider’s view.

For safety, it is essential to keep the ATV in good condition. Perform a pre-trip inspection before riding the ATV and institute a preventive maintenance program. Be aware of the turning and maneuvering space needed for the ATV.

Introduce the ATV slowly to cattle. Their first experiences should be positively associated with a handling activity such as feeding. Many people do not realize that cattle’s behavior during handling is affected by previous experiences. Placing the ATV in a field or pen will attract the animals and allow the animals to approach, poke, and sniff. Understanding the concepts of flight zone and point of balance described earlier will enable you to use the ATV to handle livestock safely.

The hazards that are involved with using ATVs can get really hairy, but with the proper personal protective equipment, the potential for an injury is reduced greatly. A helmet with a face shield should be used. Approved gloves should be used, along with long pants, long-sleeve shirts and the clothing should fit but not be loose which could catch on branches or fences. Boots or shoes that reach above the ankle should be worn and heels / soles should be slip-resistant.

The Wilkes County Corn Growers Association will have a meeting on Tuesday, March 1, 2015, at the Wilkes County Agricultural Building in Wilkesboro starting at 6:30 p.m. Corn and soybean specialists will be on hand to talk about the latest research-based production practices, hybrid selection and pest control. Dealers, private and commercial applicators with an agricultural plant pesticide license may obtain 2.0 hours (Category N, O, D, X) of pesticide credit by attending.